Hailing from Chicago, USA (the birthplace of House Music)
Josh The Funky 1 wears the hat of DJ, producer, radio/podcast host and founder of the label Funktion Recordings.
Having firmly etched his way into the fabric of Dance music culture and recently being hailed as “one to watch” in Mixmag magazine (UK),
the world has begun taking notice of one of North Americas finest exports.

In a world where everyone wants to be a DJ, he has carved his niche by combining superb showmanship with turntabilist styled DJ skills. “For me Deejaying is about being an entertainer and a music selector, I never have to pretend like I’m feeling the music, it shows naturally and its infectious to others in the crowd.” A DJ now for over a decade, his travels across the world have developed his unique musical sense, easily genre hopping between styles, it’s not surprising to hear a blend of Big-room house, uplifting vocals, tech, progressive, tribal and funky jacking beats all side by side. “I look at my sets like cooking ,you need different ingredients and spices mixed together or it's a bland meal”
While some DJ’s are content simply playing record to record "The Funky 1" has become synonymous with using scratching, loops, acapellas, and effects, while playing on three CDJ decks, allowing for an unparalleled level of creativity

Coming from a city so deeply rooted in House Music, it was interestingly enough hip-hop and the sub-culture around it that initially sparked his interest into the DJ world. Buying a pair of decks while still in grade school, Josh discovered the art of scratching and was instantly mesmerized. His passion and persistence for the art form proved to be worthwhile, as he has since become a D.M.C. Midwest Finalist and a winner of Miami’s W.M.C.- D.J. Spin-Off.

His first exposure to house music came through Chicago radio station B96 (96.3 fm), where every Friday and Saturday night the sounds of early Chicago House were being radiated into the streets.
It’s only naturally fitting then that several years later, he was hand picked to become a weekly resident on B96, the exact same Mix Show that initially hooked him in. While local radio proved to be an invaluable experience, as the digital era progressed it also became limiting.

Looking to embrace new technology, a new venture into podcasting was launched with the“Universal Sound” Podcast. Featuring an upfront selection of House music every month it has provided the ability to reach a global audience by allowing listeners from the anywhere in the world to download the mix show. “I’m always looking forward and trying exposing new music to as many people as possible...... Podcasting has become the perfect platform to showcase my sound to people across the globe"

As is the natural progression for DJ’s to start producing their own music, it was while still a teenager that Josh found himself releasing his first original productions on Chicago based label, International House Records (I.H.R.). Owned by DJ Bad Boy Bill, he quickly snapped up his first single, and it was soon there after that Josh was personally enlisted to be a studio engineer and co-producer on his “Bangin the Box” Mix CD series.
With a wealth of experience under his belt already at an early age, it was apparent that having your own label was essential in creating a brand and identity. Founded and birthed in 2001, Funktion Recordings became a record label for both international artists as well as his own original material. Looking to expand the labels capacity he began a partnership with long time friend and associate, Gus Calderone in 2005. Both passionate and sharing the same vision, they have worked tirelessly at bringing the U.S. based label to the forefront of the International Dance Music world. “ The record label has become so important to me in this digital era where there is just to much music out there for DJ’s to sort through, a trusted brand like ours is vital as a point of reference when searching for new music.” With a growing catalogue from a who’s who of producers including David Tort, Ian Carey, Franky Rizardo, Granite & Phunk, the label is firmly placed at the top of DJ’s go-to list. Of course the label has also been a platform for Josh’s own releases while letting him lend a hand remixing the likes of Kurd Maverick, Chriss Ortega, Harrison Crump, and Erick Decks.

Now in 2011, he plans to further increase his output of original material/remixes along with several collaborations in the works. With Mixmag magazine (UK) touting him in the press and having already toured through the UK, Germany, North America, what can we can expect next from Josh The Funky 1 ? “My goal is simple ......to reach as many people as possible!” 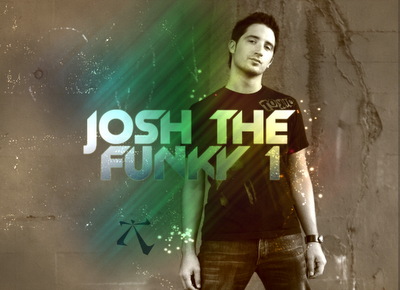